1st Gildersome Brownies from Leeds were visited during their residential break in the village of Hutton le Hole on Wednesday 10th April to start work on their stargazer badge.  Secretary Andy Exton FRAS and Honorary President John Harper FRAS attended the evening with the dozen Brownies and leaders at the Barmoor house that can be used by charities and groups for short residential breaks situated in the North Yorkshire Moors National Park. 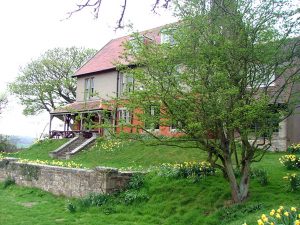 Andy started the evening by given a presentation on a number of the requirements of the badge.  This included the differences between stars, planets and satellites, objects within our Solar System (Sun, planets, asteroids and comets) and a number of recognisable northern hemisphere constellations and the mythological stories behind them.  Included in the constellations was Ursa Major (the Great Bear) and the brownies learnt how to use the pointer stars in the Plough asterism to find the pole star, Polaris and how the ancient civilisations were able to navigate using the patterns of stars in the night sky.

Cloud outside meant that no observing was possible so John was able to give the Brownies a simulated flight through the Solar System to some of the planets and satellites they had learnt about earlier in the evening.  Starting from an orbit above Earth, they were taken into orbit around the Moon, Mars, Jupiter and its moons Io and Europa before heading to Saturn and passing through its ring system to visit the small satellites of Prometheus and Pandora. 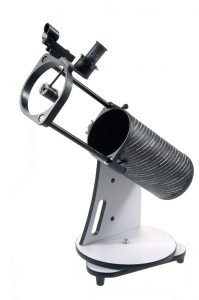 Luckily, some short breaks in the cloud were available after the talks so the Brownies were able to go outside and look at Jupiter through a Skywatcher Heritage 130P Dobsonian telescope.  The poor seeing meant that despite the planet being visible, little detail was observable and the Galilean satellites kept appearing and disappearing from view.  Despite this though, the Brownies were very satisfied to have the chance to look through a telescope at the largest planet in our Solar System.

A big thank you to 1st Gildersome Brownies for the invite to help with the Stargazer badges and also for the fantastic “Shining Star” Easter eggs we received.