Saturday 23rd February saw our final BBC Stargazing LIVE event of the 2013 season at RSPB Bempton Cliffs.  As with the January event, a good turnout was at Bempton with over 50 members of the public despite the cloudy weather throughout the evening.

The clouds meant that no observing was possible with only a slight glimpse of Orion’s Belt, Jupiter and the Moon for a matter of minutes in the skies.  Despite this though, the visitors were able to enjoy talks and a range of activities in the shop. 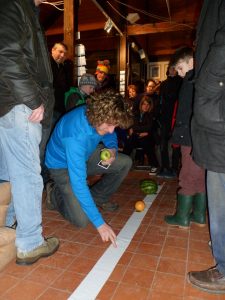 The evening started with a DVD introduction and video image montage from the supplied materials from the BBC which also included the 2013 stargazing guides that were handed out to visitors.  Following this, Andy Exton FRAS gave a talk on the objects in the solar system and beyond.  This talk included the Sun, planets, satellites, asteroids, comets, star clusters, nebulae and galaxies.  Following this talk, Andy then demonstrated the Solar System in terms of its planetary sizes and distances using a range of fruits and toilet roll along the length of the shop.

SARAS member Bob Christy FBIS followed Andy’s talk and demonstration by remaining in the solar system and along with his iPad and software was able to demonstrate the orbits of the planets along with the dwarf planet of Pluto.  The software also showed that stars outside our Solar System were not at equal distances on the night sky and their brightness appeared different when in a different location to Earth. 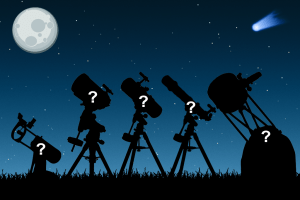 Which telescope should I buy???

To conclude the evening, Andy gave a quick session on the different types of telescopes (refractor, reflector and catadioptric) that were available and how their designs varied and the types of observations they were suited to.  As well as telescopes, binoculars, mounts and other astronomy equipment was covered.  A number of telescopes and binoculars were set up outside for people to look at following this along with the chance to seek further advice and information from the members present.

In addition to Andy and Bob, society members Neil Graham and Susan Mimmack were also in attendance assisting with the evening along with their telescopes and binoculars.