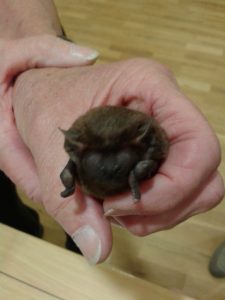 A bat up close

Despite cloud and persistent drizzle, a group of around 25 individuals still ventured into Dalby Forest.  Leslie gave a short presentation including some of the species of bats native to the British Isles and explained their preferred habitats including why Dalby Forest is an ideal home for bats.  Following this short talk, 2 species of bats were then shown up close and with the help of a bat detector, the voices of the bats could be heard. 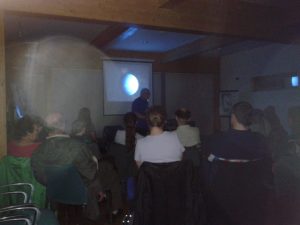 John Harper FRAS giving a tour of the Solar System

As is normally the case with public events, with the weather being unkind an alternative had to be provided indoors.  John Harper FRAS gave a tour of the Solar System starting at the planet Neptune and moving inwards, eventually arriving at the planet Earth.  On the way, attendees were able to see the planets and some of the satellites up close as well as the backdrop of constellations.  Following the talk, Andy Exton FRAS opened the observatories so the telescopes of the society could be seen and any questions answered. Public observing events commence on Friday October 4th.