Alternative Explanations Given at Society Meeting 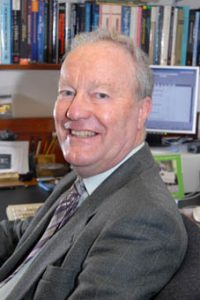 Joining us as guest speaker for the May meeting of the society at Ayton Village Hall was returning speaker Jeremy Dunning Davies, retired senior lecturer in applied mathematics at the University of Hull.

Jeremy explained that the now common terms ‘Dark Matter’, ‘Dark Energy’ (and now ‘Dark Flow’), which make theoretical physicists equations for missing mass in the universe work, could also be explained by other factors.

These included the effect of the so called ‘Electric Universe’, the electromagnetic forces present in the universe, pulling and shaping galaxy formation, without the need for Dark Matter to be present at all; or the effect of Plasma, present all over the universe and its effect on the formation of galactic and nebulous structures.

Jeremy’s talk centred on the Scientific Establishment’s method of creating explanations to fit equations (i.e. Dark Matter) rather than allowing the observations to dictate changes in accepted science, something which has occurred for centuries. Jeremy also covered the downfalls of these who have challenged established theories with observational evidence which did not fit.

Jeremy was also very clear to explain that the Electric universe and other explanations were never intended to be complete alternatives for current theories but in fact additions to them, all in order to reach the ultimate goal of science, Truth.

A very interesting talk on a subject rarely encountered in the public domain of science. We hope Jeremy will join us again soon with another talk on alternative points of view of established science.