Scarborough’s Star Disk is the largest illuminated “Star Disk” in the UK, and possibly in Europe (26m in diameter). It was officially “switched on” by the Deputy Mayor of Scarborough Cllr. Jim Preston on January 28th 2006, at 7 PM.

The disk, constructed on the site of the South Bay Pool, contains, as fibre optic terminals, the 42 brightest circumpolar stars (stars which never set) as seen from Scarborough.  It also marks the positions of the sunrise points over the North Sea for various dates in the year. 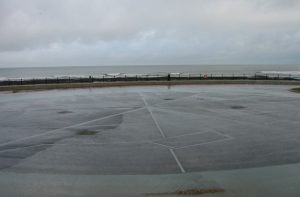 The Plough in the foreground

The idea for this stage in the development of the South Bay Pool was instigated by “Create”, an arts and cultural agency, specialising in the setting up of temporary works of art and events. Also involved, in the ongoing project is the Scarborough Urban Renaissance of Public Space Group working in conjunction with Scarborough Borough Council. Funding was provided by “Yorkshire Forward” and the Borough Council. Because of the extensive involvement in the preparatory work for this project done by the President John Harper, on behalf of SARAS, it is rather nice that the educational “illumination” became operational within a month of the 30th birthday of the Society! 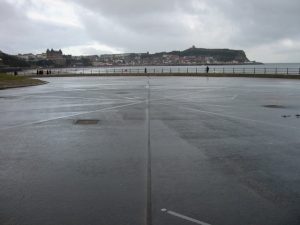 A large Public Star Party was held at the South Bay Pool site, attended by members of Scarborough and Ryedale Astronomical Society and nearby Whitby and District Astronomical Society. The major attraction for members of the public was the chance to observe through the telescopes Saturn with its beautiful ring system and major satellites. The planet was at Opposition and its nearest to Earth on January 27th, the day before the event!

Details of how to use the Star Disk HERE

Enquiries relating to the maintenance of the Star Disk, especially if it is not working, should be directed to Scarborough Borough Council via this online reporting form.