Posted on January 4, 2014 by sarascontent 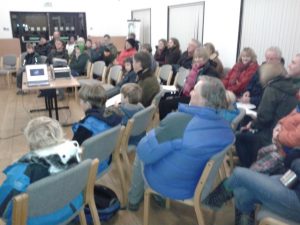 Scarborough & Ryedale Astronomical Society welcomed a group of around 50 people to the first public stargazing event of the year in Dalby Forest.

Despite promising conditions prior to the start of the evening, the clouds and drizzle rolled in and unfortunately no observing of the night sky was possible.

As an alternative, society secretary Andy Exton FRAS gave a talk on the winter sky including the constellations of Orion, Gemini and Taurus and the deep sky objects contained within.  Following the talk, several questions were asked including cosmology and the expansion of the Universe with society Chairman Howard Watson assisting with the answers.  Many thanks must go to junior member Joshua Edwards who assisted throughout the evening.

Those attending were able to take away materials including the BBC Stargazing LIVE 2014 calendar that has been produced for the series that airs on BBC2 between 7th and 9th January at 8pm.

SARAS are holding an additional event in Dalby Forest on Saturday 11th January to coincide with the TV series.  For additional details on this event, please visit the event calendar.