The guest speaker for the October meeting of Scarborough & Ryedale Astronomical Society was Dr Janet Humphreys, formerly of Leeds University and a current Open University tutor on the 2nd level astronomy and planetary science courses.  The talk given by Janet was entitled Cosmic Recycling and saw over 30 society members and visitors in attendance at Ayton Village Hall, East Ayton.

Progressing from the big bang, the talk started out by looking at the required environments for a star to form from a gas cloud. From the pp reaction forming helium from hydrogen, the CNO cycle using carbon, nitrogen and oxygen as catalysts and the positions of these stars on the Hertzsprung-Russell diagram.  Following the main sequence lifetimes the continued evolution of stars with the triple alpha reaction forming carbon, carbon burning resulting in elements including oxygen, neon, sodium and magnesium and the continued burning reactions through to the formation of iron. 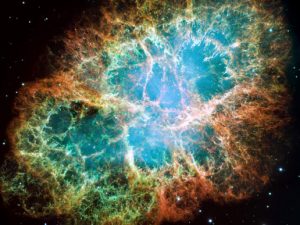 Larger stars are required for elements heavier than iron found in the periodic table including gold.  For these elements large mass stars are required and a supernova resulting in r-process reactions that are powered by a large flux of neutrons, forming neutron rich elements.  Supernovae also return elements to the interstellar medium and can also trigger star formation through their shock waves.

The talk concluded by looking at the creation of planetary systems, differentiation of planetary bodies forming dense metallic cores, the late heavy bombardment adding heavy elements to the Earth’s crust, the formation of gold veins and the degassing of the planet bringing carbon to the atmosphere.

Many thanks to Janet for a very informative talk and being able to answer many questions from the large group present.