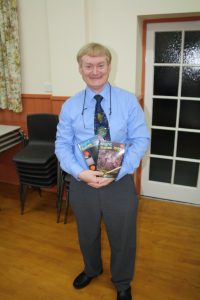 The February monthly meeting of the society was held at Ayton Village Hall on Friday 21st February.  Guest speaker for the meeting was Paul Money FRAS FBIS who had last visited the society around a year earlier.  The topic for this occasion was the 1st installment of the Images of the Universe series of talks.

The Images of the Universe talks are a selection of 10 images that have inspired Paul with subsidiary images to explain each of the selection.  Among the images included were the famous Pillars of Creation and Tadpole galaxy taken by the Hubble Space Telescope, the volcanism on the satellite of Jupiter, Io recorded by Voyager 2 and the original shot of Earth taken by Cassini from Saturn (with the recent shot being added).

As usual a very popular and entertaining talk from Paul.  Society members had the chance after the talk to purchase the 2014 edition of Nightscenes.  For anyone not at the talk or who did not get chance to purchase, it can be found at the Astrospace publications website.  The society cannot wait for volume 2.