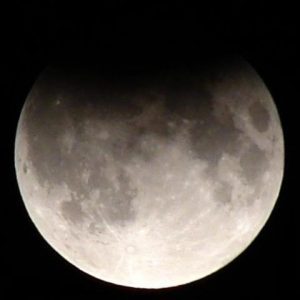 Thursday 25th April 2013 sees a partial lunar eclipse and when I say partial, it is very partial!  The Moon with rise in the southeast and the maximum of the eclipse occurs when the Moon has an altitude of only 4° at a time of 20:07 UT (21:07 BST) with the eclipse starting at 19:54 UT (20:54 BST).  Unfortunately in the UK we are unable to see the whole eclipse (possible in Western Asia and Middle East) but shortly after sunset a partially eclipsed moon will be visible rising.  For the global visibility, please visit the HM National Almanac Office website. 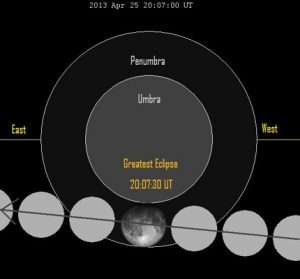 The eclipse occurs due to the Moon passing through the shadow of the Earth.  The shadow of the Earth can be thought of as a bullseye with the centre being known as the umbra and the outer penumbra.  The umbra forms the real shadow and is responsible for visible lunar eclipses whereas the penumbra is a weaker shadow that is harder to see.

For information, this is the 3rd shortest partial lunar eclipse of the 21st century with the Moon being eclipsed by the umbra for around 27 minutes.  Two further lunar eclipses are visible during 2013, both penumbral (May 25th and October 18th / 19th).

This entry was posted in News, Observing and tagged Earth, Moon, Partial Lunar Eclipse, penumbra, umbra. Bookmark the permalink.
Scarborough & Ryedale Astronomical Society
This website uses cookies to improve your experience. We'll assume you're ok with this, but you can opt-out if you wish.Accept Reject Read More
Privacy & Cookies Policy