Despite poor weather, including the odd flake of snow, the RSPB Stargazing LIVE event was enjoyed by all.  We are still awaiting confirmation from the RSPB on final figures, but we estimate an attendance of around 70 members of the public, 10 society members, and 10 RSPB staff.  This was a great turnout considering the conditions.

The evening started off with a tour of the constellations and objects in the winter sky by Andy Exton FRAS.  Next, Bob Christy FBIS gave an informative talk on satellites and the ISS.  We had a refreshment break, allowing members of the public to ask the society members questions about equipment, membership, objects in the night sky and things we had talked about in the presentations.

A quick peek outside showed that the clouds were still lingering on the East Yorkshire cliff tops.  Andy Exton began a virtual tour of the solar system.  Shortly after completing the tour of the Planets, the call everyone had been waiting for came: stars were visible! 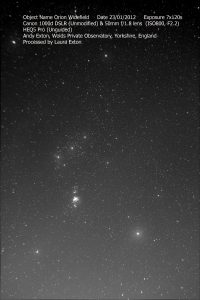 The eager public quickly made their way outside to the various telescopes society members had set up earlier in the evening.  On show were an 8″ and 12″ Dobsonian, two 6″ Newtonian Reflectors, and a set of binoculars.  The public were delighted to be able to view Jupiter and the Galilean Satellites through the telescopes, clearly showing the equatorial bands on Jupiter.  The Plough was visible, so society members were able to explain how to find Polaris from this asterism.  The winter constellations of Orion and Taurus were intermittently visible, along with Cassiopeia.

Overall the night was very enjoyable and we hope to be able to bring more events like this in the future.  Maria Prchlik from the RSPB took some photos on the evening.

Please keep an eye on our website for future events at RSPB Bempton, or contact them directly to register your interest for upcoming stargazing events at the reserve (01262 851179).  In the meantime, please come along to one of our public stargazing nights in Dalby Forest, which has recently been awarded Dark Sky Status.  Our next event in the forest is Friday 1st February, 8pm.  More details available on our events calendar.