April sees Global Astronomy Month (GAM) 2013.  Between April 1st and 30th, as the name suggests, across the world various events will be taking place to celebrate this annual event.  Global Astronomy Month is organised by Astronomers Without Borders whose motto is “One People, One Sky” – something that is incorporated into the GAM 2013 logo.

Included early in the month is International Dark Sky Week (IDSW)  running between April 5th-11th.  The aims of IDSW are to bring awareness to light pollution caused by poor-quality lighting and to appreciate the beauty of the night sky.  Anyone can get involved during this week to identify how dark their skies are by

taking part in a star count run by Globe at Night.  Dark sky awareness is something of importance to the society as our Low Dalby Astronomy Centre is a Milky Way Class, Dark Sky Discovery site.  The count that coincides with IDSW runs between March 31st and April 9th and requires the public to view either the constellation of Orion or Leo for observers in the northern hemisphere at least an hour after sunset.  By counting the stars visible in these constellations it will help to produce a world wide map of the effects of light pollution.  Results are logged via the Globe at Night website and they are aiming to receive over 15,000 observations for the 2013 star count.

Other events taking place during Global Astronomy Month include the observations of a lunar eclipse for some areas of the globe on April 25th.  For observers in Scarborough, a slight eclipse will be visible and details will be added to the website closer to the event.  The Lyrid meteor shower peaking in the early hours of April 22nd will allow people to get 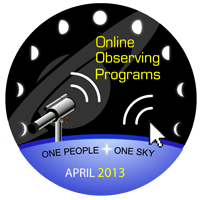 outside and observe meteors – something that can be done without the aid of a telescope.  Information on the Lyrids can be found on our Lyrids webpage.  Also included during the month are Jupiter, Saturn and Solar days.  Even if the clouds get in the way, GAM is also incorporating a number of events that can be viewed online with details on the GAM online observing programs page including a Messier Marathon on April 1st, joining in with a Global Star party on April 20th and a music concert on April 28th.

Please keep an eye on the Scarborough & Ryedale Astronomical Society website throughout April for further GAM 2013 news and events.