Posted on December 1, 2012 by sarascontent 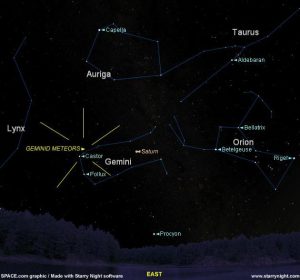 Late on the evening of Thursday 13th December through to dawn of Friday 14th December the peak of the Geminids meteor shower occurs.  The radiant of the shower is close to the bright star of Castor (α Gem) in the constellation of Gemini.

For the 2012 shower, the peak occurs during a moonless evening so spotting fainter meteors should be easier.  The Geminids are a satisfying shower, comparable to the Summer Perseids.  However, observers have to brave the December chill in order to enjoy this shower.  Those who can cope with the cold could be rewarded with hourly rates of approximately 80-130 meteors.

Unlike other meteor showers that result from comet debris, the Geminids are produced from an Earth-crossing asteroid, 3200 Phaeton.  The debris is believed to be only several thousand years old as the radiant covers only a small area of sky (around 0.2 degrees in diameter).  Should you brave the cold and observe any Geminids, please feel free to report your observations to Mell Jeffery, F.R.A.S for inclusion in Skynotes.

This entry was posted in News, Observing and tagged Castor, Gemini, Geminids, Mell Jeffery FRAS, meteor shower. Bookmark the permalink.
Scarborough & Ryedale Astronomical Society
This website uses cookies to improve your experience. We'll assume you're ok with this, but you can opt-out if you wish.Accept Reject Read More
Privacy & Cookies Policy