Posted on September 27, 2014 by sarascontent 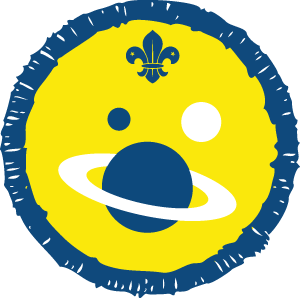 The Space Activity Badge is a newly launched badge from the Scout Association for Beavers and this was the first group that SARAS have assisted in achieving.

The requirements of the badge are as follows:

The group had previously visited the Scarborough Star Disk in the South Bay to learn about some of the constellations visible in the night sky and had made their own Solar System models.  Andy helped them learn more about the planets and moons in our Solar System, some of the recognizable constellations visible from Scarborough and gave some info on current space missions including the International Space Station, Curiosity, Rosetta, MAVEN, Mangalyaan and New Horizons.

If any other local scout groups require assistance with space and stargazing activity badges, please do get in touch.