On Thursday 23rd May 2013 society founder and Honorary President John Harper FRAS visited the Filey & District group of the U3A (The University of the Third Age).  Follows is a quick note from John on the talk:

“I enjoyed tremendously speaking to the audience of 150 members of the Filey U3A in the Concert Hall of the Filey Evron Centre.  We went on a ‘Journey into Space’, and everyone enjoyed the hour long adventure. There were lots of interesting questions at the end of the session ranging from reasons for the irregular shapes of the smaller bodies in the Solar System, a discussion about the possibilities of life throughout the galaxy and to the real reason for Filey being the centre of UFO activity.” 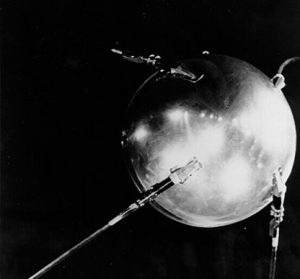 “For this, I believe that a younger version of myself must take full responsibility! Back in August of 1958, I informed the landlady of the B.& B., at which we were staying, that Sputnik 1 was due to pass over Filey on a particular evening that week.  The dear lady went around the neighbourhood telling everyone, and a great multitude of Filey folk came out to see the first Russian artificial satellite launched the previous year.  Sure enough it passed almost directly over Filey, and everyone believed that the Russians had brought the satellite to Scarborough to send it up from there for Filey residents and their guests to see as it passed over the town, before being recovered in Bridlington, to be taken somewhere else for a similar showing!  It is my belief that ‘Chinese Whispers’ over the decades, sparked off by that apparition of Sputnik, has led to the belief of Filey’s importance as a popular resort for alien visitors.  My idea was well received!”

“I suggested that my talk could be followed up in Autumn by a visit of Society members with telescopes to Carr Nez at the top of the Country Park, to give U3A members in particular, and Filey residents in general, the opportunity to view the night sky.  A donation was given to the Society, after the talk.”

This entry was posted in News, Public Outreach and tagged Bridlington, Filey, John Harper FRAS, Scarborough, Solar System, Sputnik, U3A, UFO. Bookmark the permalink.
This website uses cookies to improve your experience. We'll assume you're ok with this, but you can opt-out if you wish.Accept Reject Read More
Privacy & Cookies Policy