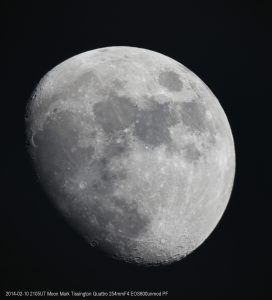 Unfortunately due to illness, society founder and honorary president John Harper was unable to give the second installment of his talk on the Moon at the February meeting at Ayton Village Hall.  Don’t worry though, we will reschedule John for later in the year to give this much anticipated follow up.  As an alternative for the evening, several other society members were able to give short presentations of their own.

The evening started with Andy Exton giving a brief demo on producing a star trail image using a DSLR camera, tripod and software.  A series of short exposures are taken from a static viewpoint and software cleverly automates the production of the star trails.

Howard Watson followed with a short talk on the Scottish telescope maker James Gregory.  Inventor of the Gregorian reflector that predated the Newtonian design of Newton, Gregory was also a leading mathematician in the use of Calculus.

Concluding the evening was Mell Jeffery.  Mell showed an entertaining video that catalogued the construction of her observatory, known as the JLO (the Jeffery’s Little Observatory).

As usual, the evening concluded with  refreshments and an opportunity to chat and seek advice from members present.