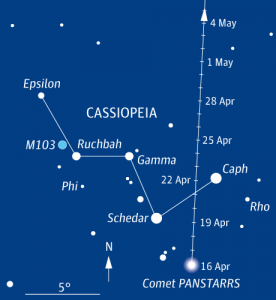 Comet C/2011 L4 (Pan-Starrs) continues its journey in the northern hemisphere skies.  Over the next couple of weeks, the comet passes through the constellation of Cassiopeia and crosses the easily recognisable asterism of stars that form the ‘W’ on April 21st.

Whilst in this area of the sky, the comet should be easy to find using the bright stars in Cassiopeia, especially on 21st April when it will fall in a straight line with the stars Caph and Schedar that form part of the ‘W’.  Panstarrs is still of reasonable brightness to be observed using a pair of binoculars.

Society members have been lucky enough to observe and image the comet over the past few weeks since it became visible in the northern hemisphere.  Member Howard Watson managed to snap the comet on April 2nd as it passed close to our near galactic neighbour, the Andromeda Galaxy or Messier 31.  This image is 4 x 2.5 second images taken with a Pentax camera with a 200mm lense, set at f/4, stacked in Deep Sky Stacker.

If any members observe or image the comet as it continues to climb higher in the sky over the next few weeks, please submit an observing report or images for inclusion in SkyNotes and the website.

This entry was posted in News, Observing and tagged Andromeda, binoculars, Caph, Cassiopeia, Cepheus, Comet, Messier, PANSTARRS, Schedar, Skynotes, Website. Bookmark the permalink.
This website uses cookies to improve your experience. We'll assume you're ok with this, but you can opt-out if you wish.Accept Reject Read More
Privacy & Cookies Policy
Necessary Always Enabled