Cassini to photograph the Earth from around 1 Billion miles 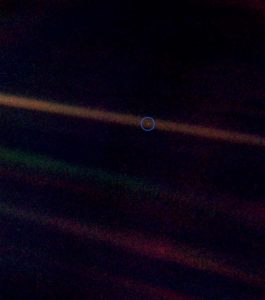 Today sees an event that is sure to produce an iconic image.  The Cassini spacecraft will capture the full rings of Saturn as well as the Earth during an eclipse of the Sun.  The photograph follows in the footsteps of the Pale Blue Dot taken by Voyager 1 from a distance of more than 3.8 billion miles in 1990 upon the request of Carl Sagan and several previous Cassini images of the Earth.

The Earth has been imaged several times from Saturn by the Cassini spacecraft during its time in the Saturn system but this will be the first event that the public will be aware of in advance.  Therefore, today is being billed as “The Day the Earth Smiled” by Astronomers Without Borders and “Wave at Saturn” by the Jet Propulsion Laboratory (JPL) of NASA.

If the skies are clear at this time, head outside and look up at Saturn or even take a look in a telescope as Cassini takes its photographs of the Earth.

This entry was posted in Events, News and tagged Carl Sagan, Cassini, Earth, NASA, Saturn, Voyager. Bookmark the permalink.
Scarborough & Ryedale Astronomical Society
This website uses cookies to improve your experience. We'll assume you're ok with this, but you can opt-out if you wish.Accept Reject Read More
Privacy & Cookies Policy