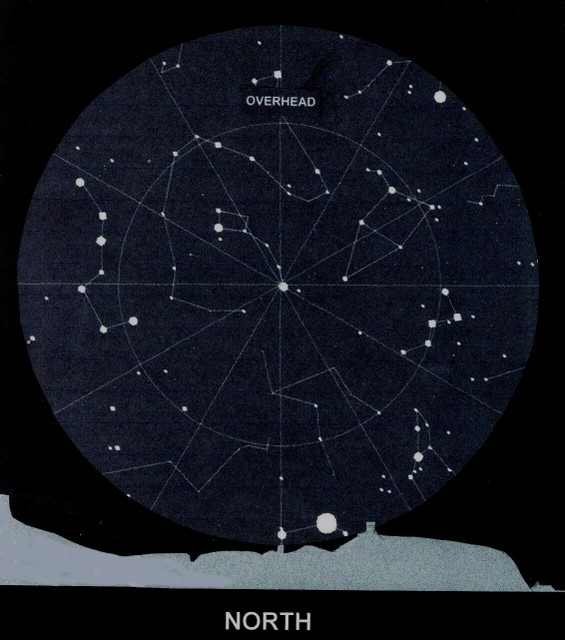 The position of the stars at astronomical midnight on the 21st June each year.

Before you is probably the largest star disk of its kind in the United Kingdom. The 42 stars, which glow at night as fibre optic light points, show the brightest stars always visible in the northern sky above Scarborough’s distinctive headland, with the Pole Star almost at the centre. You will recognise the seven stars of “The Plough”, or “Big Dipper”, perhaps the most well known pattern of stars in the northern hemisphere. Also you will see the “W” shape of Cassiopeia, a vain queen who featured in a famous story of Greek mythology, together with her husband, King Cepheus of Ethiopia. Can you also spot the “Little Bear” with the Pole Star at the tip of his tail, and Draco the Dragon snaking around between the Plough and the “Little Dipper”, another name for the little Bear?

The brightest star on the disk is Capella, the little she-goat, in the arms of Auriga, the Charioteer. This star, the sixth brightest in the entire sky, may be seen low in the north during summer nights, but almost overhead at midnight in midwinter.

If you stand at the very centre of the disk, where all the lines converge, your exact geographical location on the earth’s surface is:

LONGITUDE: 00 degrees, 23 minutes, 36.8 seconds WEST of the Greenwich Meridian, and from here, notice how True North is exactly in line with the tower of St Mary’s Church!

From the disk’s centre the positions of Sunrise over the sea at various dates can be seen. The dates are marked on the inner wave-wall seat. 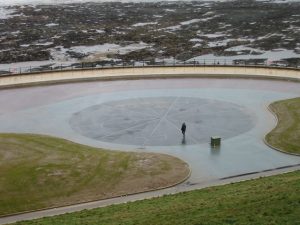 Star disk viewed from above

Please note that all the times mentioned in this description are G.M.T. so please remember to add 1 hour when Summer Time is in force!

The stars you see before you are in the positions they occupy in the northern sky at astronomical midnight on June 21st each year. Stand on the June 21st date mark and imagine the entire disk placed in the sky above St Mary’s Church so that the far end of the disk is overhead and the edge nearest to you almost touching the headland. This is how to use the disk.

As the earth rotates on its axis, so the stars seem to turn around the pole as the night progresses, and the star disk can also show you the different appearances of the northern stars during the course of a single night. Here’s how:

Suppose it is June 21st and you want to see how the northern sky looks two hours earlier, at 10 pm. Each of the converging lines on the chart represents 2 hours of time, so if you stand at the edge of the line labelled “21st May” the view across the disk shows you the appearance of the stars two hours earlier. Similarly, if you want to see how the stars are positioned two hours later, at 2 am on June 21st, stand on the edge of the line marked 21st July. This method can be used for any date you require.

Enquiries relating to the maintenance of the Star Disk, especially if it is not working, should be directed to Scarborough Borough Council via this online reporting form.