Scarborough and Ryedale Astronomical Society awarded Honorary Life Membership to society founder John Harper FRAS, and Sheila Anderson in 2011 in recognition of their contribution to the society and the promotion of astronomy in the local area.  John stood down from serving on the Executive Committee and was made our Honorary President. 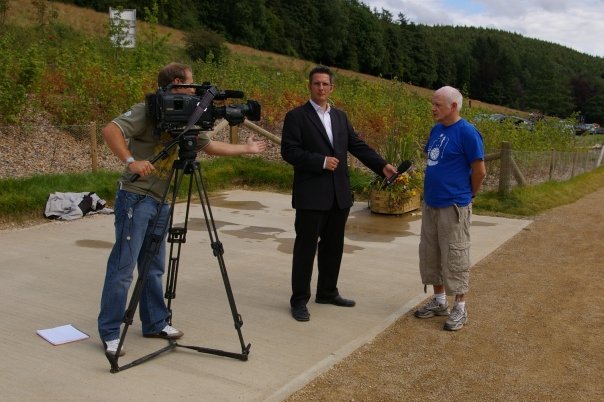 John Harper FRAS, being interviewed by the BBC at the site of the new domes in 2008

John worked tirelessly in the local community to promote astronomy and to raise the profile of significant astronomical events, including eclipses and transits.  He hosted dozens of star parties around the area and worked closely with the Forestry Commission to help establish the Low Dalby Astronomy Centre in 2001.  John’s passion for astronomy is undeniable, and his knowledge is outstanding.

Sheila Anderson spent many years serving as Secretary to the society.  In recent times Sheila had a starring role in assisting with the arranging of the annual Starfest star camp at Dalby Forest, along with the programme of events and all the behind the scenes work that goes into the smooth running of a busy society.

John and Sheila still both contribute to our monthly “SkyNotes” publication, providing our Night Sky feature, and are regular attendees at our monthly meetings. 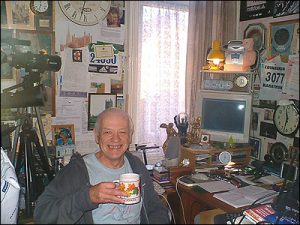 John Harper FRAS being interviewed at home by the BBC

In 2017, Mell Jeffrey stepped down as Treasurer of the Society after 10 years in the role.
In addition to the Treasurer role, Mell also had undertaken the organising of StarFest each year during this time and ensured a successful event for all.
On stepping down Mell was presented with an award as well as being granted a lifetime membership to the society.